Case in point: Zodiac, The Usual Suspects, all Bond films, almost all movies about unsolved murders committed by men, and virtually any superhero film of the last 10 years

For the second of the cinematic clichés in this series we need to invoke Lacan’s formulas for sexuation from Seminar XX: 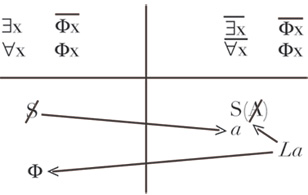 Immediately after sketching these on the blackboard at his seminar, Lacan issued a warning to his audience – “After what I just put on the board, you may think you know everything. Don’t.” (Seminar XX, p.78). Lacanians tend to over-egg these formulas so we will heed Lacan’s caution and just look at the top left hand side of the formulas, the upper quadrant that applies to men:

To get Lacan’s point we have to quickly wade through some Lacanian jargon. The ‘phallic function’ here refers to a particular kind of limited enjoyment or, in Lacanese, a ‘paltry jouissance’. ‘Phallic’ jouissance is ‘castrated’ jouissance because the ‘phallus’ in Lacanian terminology refers to the mythical potency of the male organ plus the idea of its lack. Lacan’s idea is that for men there is something that curtails or limits the experience of full enjoyment, whether that enjoyment is overtly sexual or otherwise. This limit is called symbolic castration. And the agent of castration is the Name-of-the-Father, or more precisely, the substitution of the Name-of-the-Father for the desire-of-the-mother in what Lacan calls the paternal metaphor.

This is true for all subjects on the male side, all men:

Except one, because Lacan also says that there is a subject that is not subject to this limit:

There is one who escapes, an exception.

This is an idea he derives from Freud’s Totem and Taboo, which we touched on briefly in the first cliché in this series on the Absent Father and Man of Steel. The subject who is the exception is the mythical father of the primal horde, the one who has access to, and total enjoyment over, all the women of the clan. In presenting the formulas Lacan describes this upper line as “the function of the father” (Seminar XX, p.79). That is, this exception does not pertain to the father as an actual person, nor even to anyone who exists, but to the formal possibility of such a subject.

And it is this sort of subject that is the source of so much fascination among all other men. We find its manifestation in the cinematic cliché of characters that represent the male exception.

All examples of this cliché imply someone who is beyond the law. Translating the top portion of Lacan’s formulas as ‘There exists a subject that is not subject to the phallic function’ implies a man who is not subject to the same rules of the game as other men. In crime films this character is literally beyond the law – beyond its reach, a character not subject to the law but a law unto himself. A central theme of crime films, either fictional or about unsolved murders, is that of ‘the man who gets away’. These films establish a ‘male exception’ for a character who is able to escape detection. Hollywood knows the potency that this idea has for a male audience, to take just two examples initially:

The male fascination with unsolved crimes committed by (presumably) other men, like that of the ‘Zodiac’ killer, extends very far – just think of the enduring fascination with the Jack the Ripper legend, and the numerous iterations it has gone through in Hollywood, from Hitchcock’s The Lodger in 1926 to the Johnny Depp vehicle From Hell in 2001 and the plethora of TV movies in between. Rather than seeing this fascination as an indicator of the audience’s misogynistic tastes (though this element may well be present), perhaps one of the reasons why these characters resonate so well with men is because a figure like Jack the Ripper has no face, no name, no established identity. He is purely formal, in the same way that the formulas are purely formal, in the same way that the Totem and Taboo myth, which Lacan draws on to elucidate the male side of his formulas, is also formal.

Going a step further, what we often find when we encounter this Lacanian movie cliché is that the character is never represented as fully  ‘unlimited’ (or ‘uncastrated’, to use Lacanian jargon). The implication of Lacan’s male formulas is that ‘men’ as a category oscillate between the ‘all men’ (the lower formula) and ‘the exception’ (the upper).

There are a lot of films that play on the oscillation between these two poles which characterises the male position. This might explain the enduring popularity of the James Bond franchise – Bond is a man (he is not a superhero, he is mortal, human) but at the same time he is not like other men (in all the Bond films he fulfills the role of the Freudian primal father by having access to as many women he wants). But in their more recent incarnations the current vogue is for the Bond films to highlight something of the character’s weakness at the same time. The latest installment of the franchise, Skyfall, opens with Bond at his lowest personal ebb – addicted to drink and painkillers, struggling to get back in the game. In Die Another Day from a few years earlier, we see him abandoned by MI5 to waste away in a North Vietnamese prison, questioning himself and the agency he serves.

Similarly, in all of the superhero films which have dominated cinema since since 2000 the superhero is not simply completely omnipotent – he (and it is always a male character) shows his human weaknesses. As per the first cliché in this series, we could count Superman as one example: a man who embodies the contradiction in Lacan’s formula for men – who is like other men (‘All subjects are subject to the phallic function’) but one who at the same time is not like other men (‘There exists a subject who is not subject to the phallic function’).

Likewise, in each of the new wave of superhero films that have come out since 2000 we find a transformation from a man who is a man, to a man who is more than a man, but still a man nonetheless. These characters can thus be seen as a kind of reification of the oscillation between the two lines of Lacan’s formula – the ‘all men’ and the ‘not all men’. The psychobabble in the most recent Batman films – the Dark Knight trilogy – isn’t just there to lend depth to the character but to affirm that in spite of being the male exception he is still subject to the same laws of castration as all other men. More broadly, these examples can perhaps be read as reiterations of the same ontological problem of identity brought out in the trinity – how can God be both God (divine, unlimited) and man (Jesus Christ)? How can a character be both a man but more than a man?

What about women? We can ask simply: in what films is there a transformation of a woman who is more than a woman, a woman who becomes something other than a woman but is a woman at the same time? Is the simplest proof of the validity of Lacan’s idea the lack of female superhero films, or the lack of success of the very few that there are? Lacan seems to be onto something about men in particular if the same can’t be said about women. But to go into this point would take us to the right hand side of Lacan’s formulas, where The Woman does not exist, an idea that is of a completely different pedigree and requires a completely different type of logic in order to understand it.

Of course, the wider question is whether the formulas tell us more about patriarchy than they do about women. Do Lacan’s formulas just reinforce gendered identities or is he saying something unique about sex/gender itself? In introducing the term ‘sexuation’ Lacan is trying to give us a good enough conceptual tool to avoid the trap of patriarchy. We’ve looked at the cliché of men in this article, but in respect of women Lacan is trying to show a feminine ‘in itself’ that is not just a male cliché.

Not everyone likes these formulas. Some Lacanians think they’re over-used, boring in how classical they have become. Non-Lacanians meanwhile will often bemoan their binary appearance and accuse them of being too essentialist. Both are points worth thinking about. But the fact that Hollywood recognises that male audiences love characters that embody the formulas for men Lacan articulated, and the frequency with which they appear in cinema, are at the very least clear validations of the fact that Lacan was onto something here.